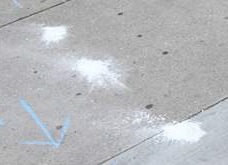 The trail is marked by blobs of flour which the pack follows. There are various and creative means for creating blobs; some use the plop right out of the sack method which works well except in high wind, others who like more control, coat a tennis ball in flour and bounce it as they go.

When the hare turns a corner, the markings should turn the corner too. Sometimes an arrow is used to make it clear that the trail turns or crosses the street or otherwise goes over/through an obstacle such as a raging stream. While it is common for the pack to get off trail, it is the hare’s responsibility to set a trail that can be followed. Marks may be discretely hidden on the backs of trees, posts etc., but need to be findable. 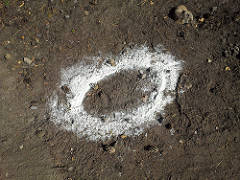 Periodically, the trail may go off in a different direction, which may be marked with a check.  A check tells the pack that they have to figure out where the trail begins again. It can begin anywhere 360-degrees around the check. The pack should use chalk or tree branches in the shape of an arrow to indicate which direction they are checking. If they find the true trail, those who are behind will know which way to go. If they find no trail or a false trail then they cross out/change the direction of the arrow. 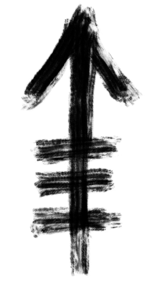 An arrow with three lines drawn through its stem is a True Trail arrow and is used frequently after checks to indicate that this is the correct trail. 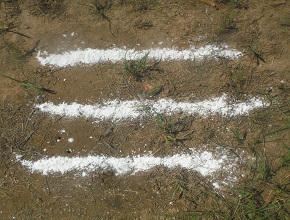 From a check, the hares may mislead the pack. A false trail looks like a real trail until you get to the end which is marked by a false trail mark.  When a false trail mark is encountered, the runners must return to the check and try again. Slow runners love false trails because the fast runners are usually running very fast in the wrong direction.

Sometimes a mark like the above image is used, where the “3” can be any number.  This means the pack needs to reverse the trail for the indicated number of plops of flour and pick up a trail in a new direction. It assumes the pack can count, which they usually do aloud for reinforcement.

YBF stands for You’ve Been F*!$3d.  Similar to a check back or a false trail, this mark indicates that the pack has to reverse an extremely long or difficult path to return to the check.  A YBF could indicate a reversal on trail that could extend to up to a 1/4 mile in length. 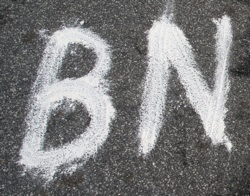 If the hares choose to host a shot check, the SC symbol should be used to indicate where a shot check is located.  Occasionally, a shot will be unmanned and the pack will need to locate the shot hidden in nearby shiggy.  The shot check should be located within 10-30 feet of the mark.

Similar to the beer near symbol, the On In indicates the end of trail.  The actual end location should be located within 1/10 mile of this mark.

Back to Hare Guide